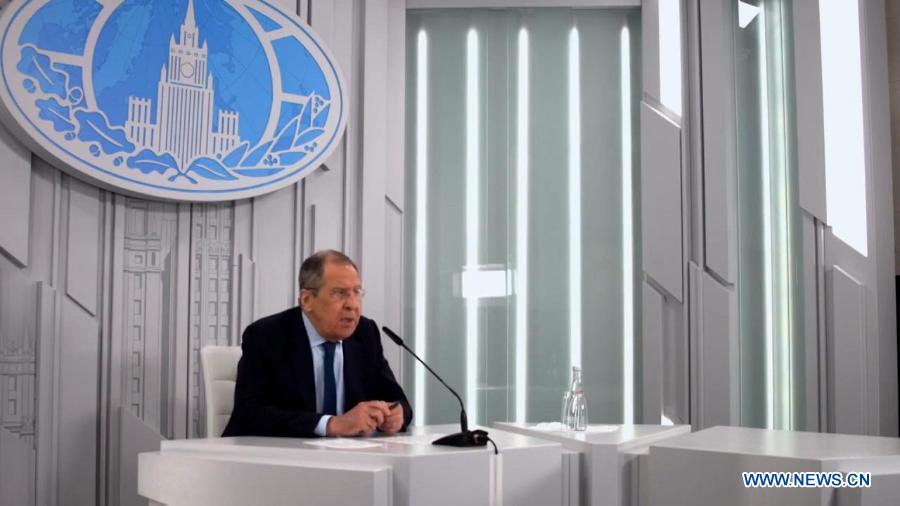 Screen shot taken on March 19, 2021 shows Russian Foreign Minister Sergei Lavrov in an online interview ahead of his visit to China. China is a truly strategic partner of Russia and a like-minded country, and their mutually trusting and respectful dialogue should serve as an example to other countries, Russian Foreign Minister Sergei Lavrov has said. (Xinhua)

MOSCOW, March 22 (Xinhua) -- China is a truly strategic partner of Russia and a like-minded country, and their mutually trusting and respectful dialogue should serve as an example to other countries, Russian Foreign Minister Sergei Lavrov has said.

"Current Russia-China relations are assessed both by our national leaders and citizens as the best in their entire history. This is a well-deserved and fair assessment," Lavrov told Xinhua and several other media outlets in an online interview ahead of his visit to China on Monday and Tuesday.

"Russia-China relations are marked by comprehensive partnership and strategic coordination, which have entered a new era," the top Russian diplomat said.

In his view, to a large extent, the bilateral ties have reached such an unprecedented level thanks to the China-Russia Treaty of Good-neighborliness and Friendly Cooperation signed in July 2001.

As this year marks the 20th anniversary of the signing of the treaty, Lavrov praised "dynamic" cooperation between Russia and China over the past two decades and called the pact a "historic" document, which has laid the political and legal foundations for a new type of relationship between the two countries.

"The model of interaction between Russia and China is absolutely free from any ideological constraints. It is of an intrinsic nature, not subject to any opportunistic factors nor against any third country," he stressed.

"However, these objective developments, which are leading to the formation of a truly multipolar and democratic world, are unfortunately being hindered by Western countries, particularly the United States," he said, adding that they seek to continue to dominate at any cost on global economy and politics and impose their will and requirements on others.

In response, Russia and China are promoting a constructive and unifying agenda and hope that the international governance system would be fair and democratic, run smoothly and be based on extensive interaction between countries and their integration initiatives, he noted.

"Cooperation between Russia and China in the international arena has a generally stabilizing effect on the global and regional situation," he said, adding that the "mutually trusting and respectful dialogue should serve as an example to other countries."

Lavrov underlined the tradition of holding joint years since 2006, such as the national years, the years of youth friendly exchanges, the year of tourism, the language years, and other similar projects.

As a result, the foundation of Russia-China friendship has been significantly strengthened and relations enriched, he said.

More than 1,000 events have been planned for the China-Russia Year of Scientific and Technological Innovation 2020-2021, Lavrov noted.

He noted that a number of events and conferences on exchanging anti-coronavirus experience were held within the framework of the Year of Scientific and Technological Innovation.

"We have maintained very close cooperation since the very first reports on COVID-19 cases. Both sides immediately provided mutual assistance: we rendered aid to our Chinese friends, and then they helped Russians," he recalled.

"I will emphasize once again that we have set an example to all countries on how to build relations with each other," Lavrov said. Enditem